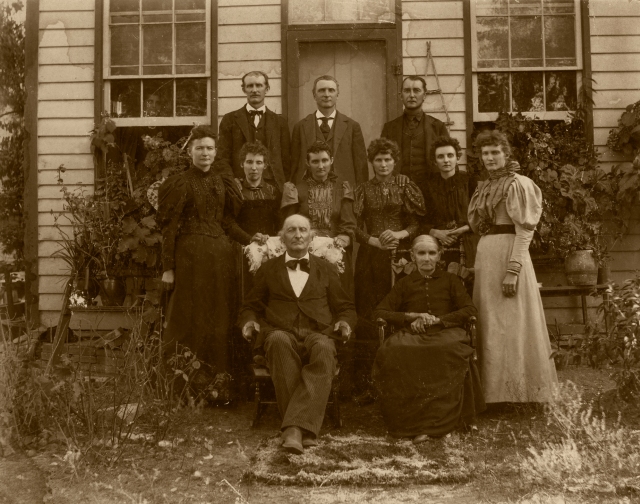 This photo of Edward Craft and Susannah Busch Craft and their adult children was probably taken near their home in Auglaize County, Ohio.  Edward and Susannah are seated. It was their gift of land to the church that established Red Bud Catholic Cemetery.

Their son Michael, probably the man to the far left in the row of three sons, was the first owner of the land, but did not keep it long before selling it to his parents. The entire family, with grandchildren included, was a large one, as you can see here: 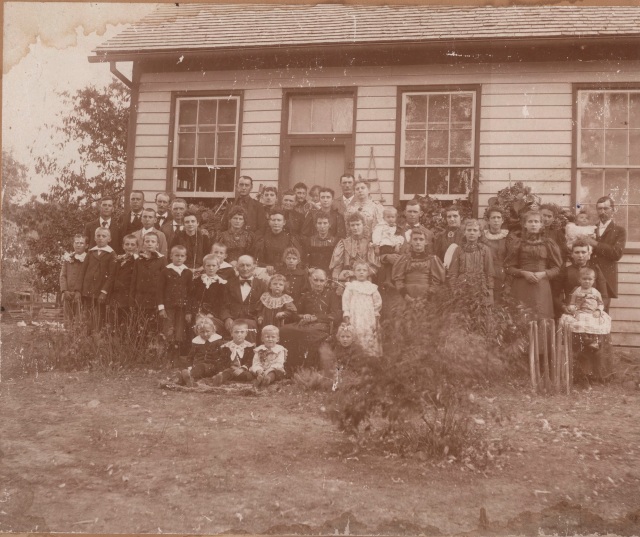 Part of the Edward and Susannah Craft lands are shown below on a section of an 1882 land map, a detail from a map of Maple Township (Township 30). You can see the three acres of the cemetery in the southwest corner of Section 14.

In the northeast corner of section 23, the road from these lands, you can see the name J.O. Kuntz. One of Edward and Susannah’s daughters, Anna Maria, and her husband, Joseph Otto (J.O.) Kuntz, purchased land on May 1, 1874.  Later, they owned the land surrounding the cemetery. I’ll have much more information about this couple and others mentioned here in future posts.

As you’ll see in those posts, at least four of these families were from Auglaize County, Ohio: the Busch, Craft, Kuntz, and Walck families.

Edward Andrew (E.A.) Busch (sections 14 and 23) is the son of Michael and Anna Maria Busch. Their daughter Susannah married F.X. Wegerer (section 23). Although not everyone named on the map is a family connection, Busch, Craft, Kuntz, Rader, Walck, and Wegerer are among those who are.

If you would like to look at an 1882 atlas map of Cowley County, visit the lovely online collection of the Library of Congress

Like Loading...
This entry was posted in Craft, Graves, History, Kuntz, Walck and tagged Cemetery, Hisory, Ohio. Bookmark the permalink.

2 Responses to The Craft Family and Red Bud Catholic Cemetery